Review of Tremark presentation on ‘The Lawful Investigation, tracing and profiling of debtors’

Tremark directors Mark Hodgson and Karl Brooker  were recently asked to undertake a presentation to members of the Chartered Institute of Credit Management (CICM) on the ‘Lawful Investigation, tracing and profiling of debtors’. Please read below CICM’s review of the Presentation.

Sheffield Branch members and guests gathered at the Mercure Parkway Hotel for the second branch meeting of 2019. After networking over refreshments and an early evening buffet Mark Hodgson and Karl Brooker of Tremark Investigations Leeds gave an enlightening and detailed presentation on the Lawful investigation, surveillance, tracing and profiling of debtors.

Mark who is founder and managing director of Tremak explained the historical journey of the business of investigators and the regulations and statutes that prevent or legitimise the enquiries of others. He went on to highlight the high-profile Government inquiries such as Operation Motorman that resulted in the Private Security Industry Act 2001 and the ‘Phone Hacking’ scandals of the last few years culminating in the Leverson Inquiry. This was followed by the game changing GDPR imposing good data practice, compliance and accountability.

We then heard in more detail about the impact of Data Protection, legitimising conditions such as consent and legitimate interest and followed through a detained investigative matrix for legitimate information gathering, data enhancement techniques, tracing and profiling.

There was practical help for members and guests with how to guides for GDPR Impact assessments when instructing outsource companies to make legitimate enquiries on their behalf. Finally there was short video of surveillance footage undertaken by Marks team highlighting the potential difficulties in gathering usable evidence and how in the end it became a successful operation that had broken a fraudulent holiday compensation claim scam leading to numerous arrests and a change in the law.

After a short question and answer session Mark conducted a prize draw sponsored by Tremark with the winning member receiving a bottle of bubbly!

Source: The Institute of Credit Management 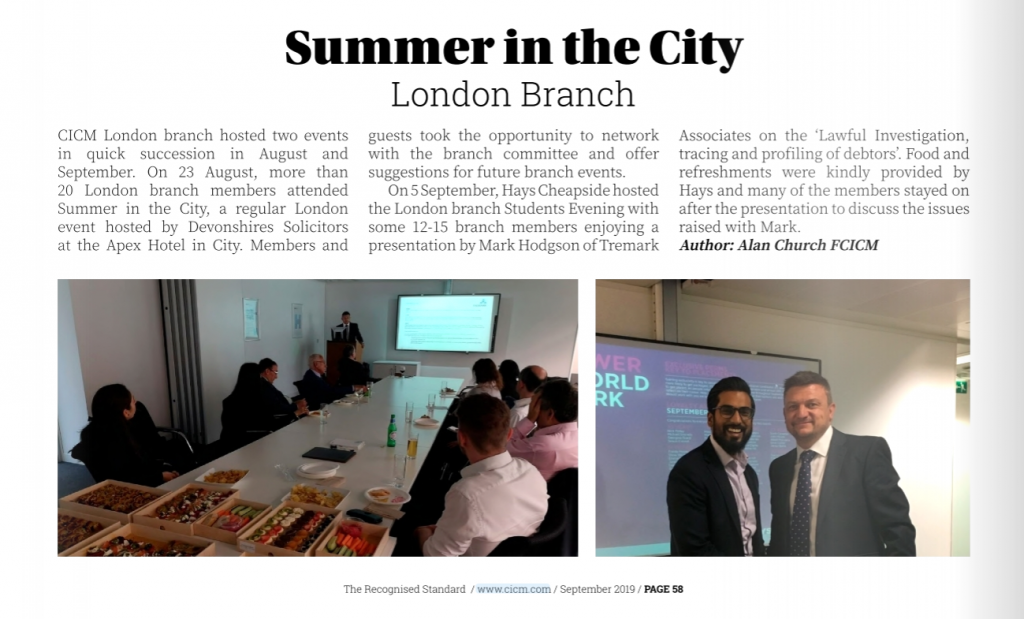 Mark Hodgson is the Managing Director of Tremark Associates, one of the UK’s leading providers of investigative services. Mark formed Tremark aged just 25 in 1995 and has over 30 years experience in private investigations and commercial debt recovery industries. He is a leading figure and a campaigner for regulation of the Industry and past President of the Association of British Investigators, a member of the World Association of Detectives, The Chartered Institute of Credit Management, The Institute of Paralegals and an associate member of R3 -The Association of Business Recovery Professionals. Mark splits his time between the Leeds and London Offices. He is a dad of two, a keen runner, cyclist and a Leeds United season ticket holder.